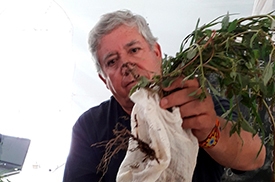 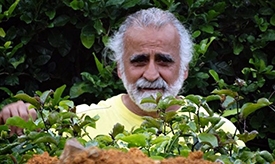 Jairo Restrepo Rivera was born in Colombia. Brazilian by adoption and agronomist by profession, he studied at the University of Pelotas in Rio Grande, southern Brazil. For years he has been travelling the world outlining his theories on what he calls organic agriculture, comparing it with the industrial economy, which he explains has led to world hunger. He is based in Cali, Colombia, from where he also travels around the southern cone of America. He has been to every single country in South America. He meets up with farmers, but farmers who really do work the land. He advises ministries, gives talks at universities and declares himself a staunch enemy of pesticides. He talks about trophobiosis (existence of life through food), the necessary remineralisation of soils through stone-meal, the regenerative power of microbiology from cow dung and forest compost to restore soil fertility. He is a forerunner in the use of chromatography as a tool for finding the balance between microbiology, minerals and organic matter in soils. He is also well-versed in how the moon influences all biological processes in living things. 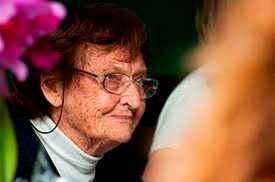 Ana Maria Primavesi (Sankt Georgen ob Judenburg, Styria, 1920) is an Austrian-born Brazilian agronomist, responsible for advances in the field of soil science in general and, in particular, ecological soil management. She is recognised as a leading researcher in agroecology and organic agriculture. She studied at the Faculty of Natural Resources and Life Sciences at the University of Vienna, where she met and fell in love with the German Dr Artur von Primavesi. They married in 1946 and emigrated to Brazil in 1949. A pioneer in soil preservation and the recovery of degraded areas, her approach to soil management is integrated with the environment. Her research focuses on agriculture that favours the biological activity of soil with a high organic matter content, avoiding tillage and replacing chemical inputs with techniques such as green manure and biological pest control, among others. Understanding soil as a living organism with different levels of interaction with plants was one of Primavesi’s contributions to agronomy. 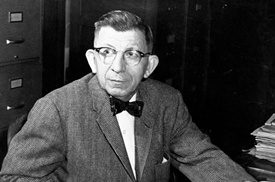 William A. Albrecht (1888-1974) US physician and soil scientist who devoted his life to studying how nutritional mineral deficiencies affect living organisms and how they lead to disease. He developed the method for balancing soil mineral nutrients –called ‘the ideal soil’– at the University of Missouri Agricultural Experiment Station in Columbia between the 1920s and 1960s. 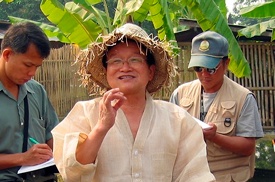 Cho Han Kyu was a South Korean researcher and pioneer of natural agriculture in Asia. He talks about the importance of maintaining living soils through the application of microbial microbiology cultures indigenous to each site and the optimal use of natural resources without synthetic chemicals. He advocated empowering small farmers by giving them weapons such as ‘natural technology’ to be free to achieve more and better harvests and preserve the main treasure available to living beings: fertile soil. His son, Youngsang Cho, has carried on his legacy and promotes natural agriculture by teaching farmers how to make their own inputs at very low cost using the Jadam method. 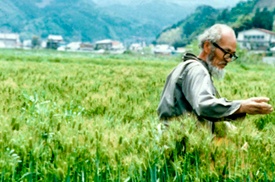 Masanobu Fukuoka studied microbiology and worked in a laboratory as an agricultural customs inspector. He soon left his job and returned to his native home (a small village on the Japanese island of Shikoku) to farm his family’s land (0.6 ha of rice and 6 ha of mandarin trees). There, he developed a natural agriculture method aimed at reversing the degenerative inertia of the soils used in modern agriculture. This type of farming needs no machinery, no chemicals and very little weeding (he learned to control weeds by using a permanent plant cover of white clover and a mulch of wheat and rye straw). The soil is not tilled and no compost is used. The fundamental difference of this agriculture is that it is worked in cooperation with nature rather than trying to conquer and ‘improve’ it.

You can find out more about which cookies we are using or switch them off in settings.

This website uses cookies so that we can provide you with the best user experience possible. Cookie information is stored in your browser and performs functions such as recognising you when you return to our website and helping our team to understand which sections of the website you find most interesting and useful.

Strictly Necessary Cookie should be enabled at all times so that we can save your preferences for cookie settings.

If you disable this cookie, we will not be able to save your preferences. This means that every time you visit this website you will need to enable or disable cookies again.